It sounds fake…or super dry and lacking of taste when you put it that way. But I have been seeing dessert recipes online that are based around dates for a while now and when I was at the grocery store a little while ago I decided to pick some up for when i became bored enough to try something new.

There are TONS of variations on this everywhere and I just decided to use which ever nuts I had on hand and since I didn’t have any coconut flakes, those didn’t make it in there either. But the REALLY taste like brownie bites! This is a perfect little recipe to have just a few morsels in the refrigerator for when you are craving something filled with chocolate.

1. In a blender, blend the walnuts and almonds until they are fine. Then add in the pinch of salt, vanilla, dates and cocoa powder. After blending for 30 seconds, add in a tablespoon of water to get everything to stick together.

2. Scoop out about a tablespoon of the mix and roll them into a ball in your hands. Refrigerate until you are ready to eat them!

They are so easy to make and definitely taste better when they are cold. All they have in them is fruit and nuts! You can’t go wrong!

What is your favorite cheat snack that isn’t really bad for you??

This weekend, Brent and I were sitting out on our porch talking about what foods we wanted to get for the week. After spending about a year with my parent’s, Brent picked up the love for Eggplant Parm. It’s become a running joke that it’s one of the only ways we can get him to willingly eat veggies.

I haven’t really been eating pasta all too often and wasn’t really feeling the heaviness of it. It’s not on my summer food loving list. Immediately, the idea was born. Spaghetti squash Eggplant Parm.

The recipe below is actually a combination of two that I have done before. Baked Eggplant and just a typical Spaghetti Squash.

1. Preheat the oven to 400 degrees. Cut each squash in half and remove the seeds. Spread the olive oil over the inside of half and place them face down on a baking sheet. Bake them for 40 minutes or until the outside has become soft or wrinkly.

2. Let them cool off to the side for a few minutes. Then take a fork to the inside of them and scrape the squash from the inside. It will turn into strings. Place the squash in a bowl.

1. Slice the eggplant in even slices with 1/4 inch to 1/2 inch width, depending on your preference. It’s more important to make them even.

2. In a flat dish with edges, whip up the eggs with 1 tablespoon of water until it is uniform. Place the bread crumbs on a separate plate. Take a slice of eggplant, place it in the eggs mixture until well covered, then transfer it to the bread crumb plate and cover it with the crumbs. Don’t forget to do the sides!

3. Put the eggplant slices on a baking sheet. Once all of the slices are finished, bake them for 15 minutes at 400 degrees, flip them over and bake for another 15 minutes or until as crispy as you want.

4. To serve, top the squash with the eggplant and finish with some red sauce and mozzarella. 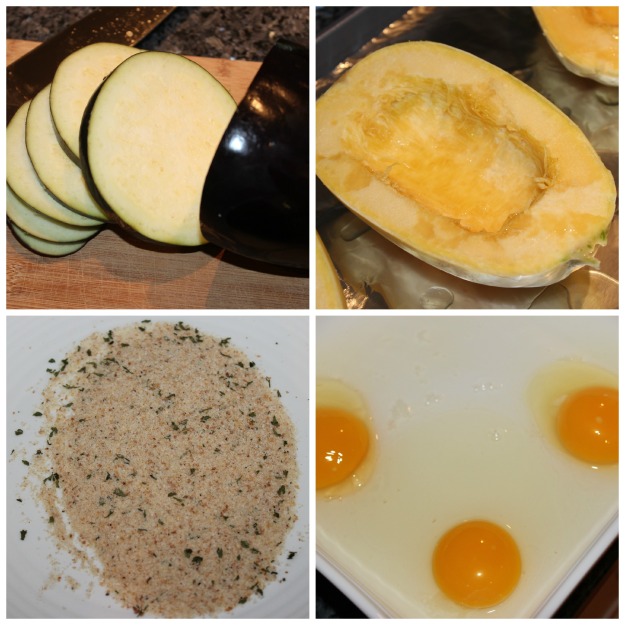 Brent took a bite of it and I quote, “This may be the best thing I have ever eaten.” Words like this are really rare because normally I get, “Yea, it’s good.” And it’s a plate of veggies!! This will be making another appearance. 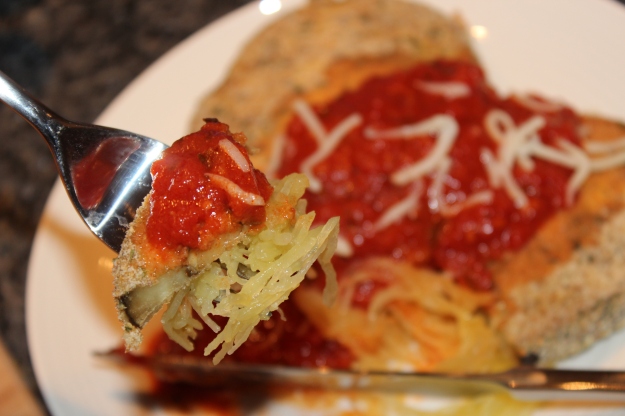 I used a new red sauce for this as well, and it was delicious. I would recommend you give it Rao’s Homemade Red Sauce a try. You could make this gluten free by just substituting gluten free bread crumbs.

Have you ever changed a favorite and had it turn out better?

It’s no surprise that I spoil our dogs. Brent blames me for Bacon being spoiled, which is probably true. 🙂

I’ve been watching re-runs of DC Cupcake and it really got me in the mood to make something fun for the dogs. I’ve been thinking about making some treats for the and all I needed was the inspiration to make some cupcakes to help make the decision easy.

I knew the basic ingredients I wanted to put in them, and just kind of wen from there. The doggies seemed to really like them…and people did too!

1. Preheat the oven to 350 degrees. First, mix the canola oil and applesauce. Then add in the peanut butter until it is smooth. Last, add in the flour and baking soda.

2. In a separate bowl, mash up the bananas and then add them into the batter. Pour the batter into mini muffin tins with paper liners. Cook them for 15 minutes.

1. Mash the banana until they are as smooth as possible. Then add in the peanut butter and mix. This will determine the thickness of the icing.

2. When the pupcakes are cooled, top them off with the icing and let the little nuggets enjoy!

The little spoiled doggies loved their little treats and I didn’t feel bad giving it to them because I know EXACTLY what’s in them. And it didn’t include any ingredients that I wouldn’t feel comfortable giving them any day of the week.

A few people tried them too…and they weren’t bad at all. Think banana bread without the sugar topping. They were delicious. 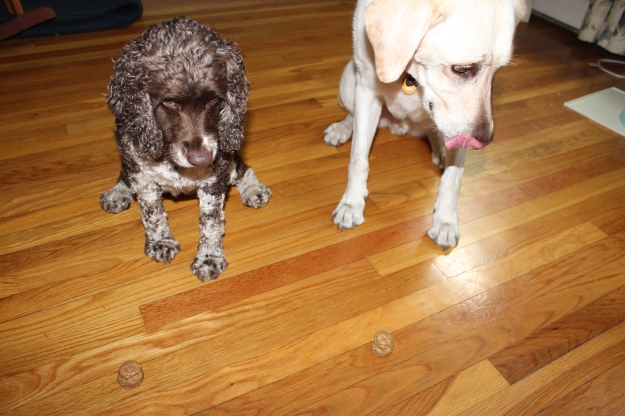 When I’m going out to the store and just want to pick up some treats to have in the cabinet, I love the Trader Joe’s Dog Treats. Simply because when you read the label, you know every ingredient. If you wouldn’t eat it, why would you feed it to them??

I’ve tasted the Trader Joe’s treats…and they are quite bland. Tastes like food…but bland. I don’t need to worry about anyone eating those 🙂

Here are some other home-made dog treats:

What are your favorite dog treats to spoil the puppies??

“Can’t you see that it’s just raining?
Ain’t no need to go outside…
But, baby, you hardly even notice
When I try to show you this
Song is meant to keep you
From doing what you’re supposed to.
Waking up too early
Maybe we can sleep in
Make you banana pancakes
Pretend like it’s the weekend now”

Every time I hear this it just makes me crave those slow weekend mornings that you just relax, sip your coffee, and eat those banana pancakes. It sounds like such a perfect little morning.

Well, last week there was a LARGE thunderstorm that came through the Boston area in the morning and it seemed to be begging just that banana pancake morning. You don’t have to ask me twice!

I decided to try out a little variation some banana protein pancakes that I found earlier in the week. The BEST thing about these pancakes is they have NO FLOUR and you really don’t miss it.

1. Place all of the ingredients in a a bowl and blend with an immersion blender. You want the batter to be completely smooth.

2. Heat up a skillet to low-medium heat and place the batter on the skillet. This will make about 2 medium sized pancakes. Flip the pancake when it starts to bubble and the edges look cooked. These will cook faster than normal pancakes so keep the temperature low.

I topped mine with the other half of the banana and some agave. It was delicious and I don’t know that I would go back to putting flour in my pancakes. To be honest, these fill you up but don’t sit as heavy as normal pancakes. A winner!!

This leaves me with so many other ideas for a ‘healthy’ pancake that doesn’t include any flour.

Have you every completely re-done a favorite and found it to be just as good??

Now I don’t want to take credit for this idea because it wasn’t me. Kaela introduced me to the idea of using a rice cake as almost an open faced sandwich instead of trying to choke down a dry, lightly salted rice cake. Let’s get real, if you eat them, you probably need a large glass of water to go with it. OR you are enjoying the caramel apple or some other sugary version of it.

Check out these yummy snacks: 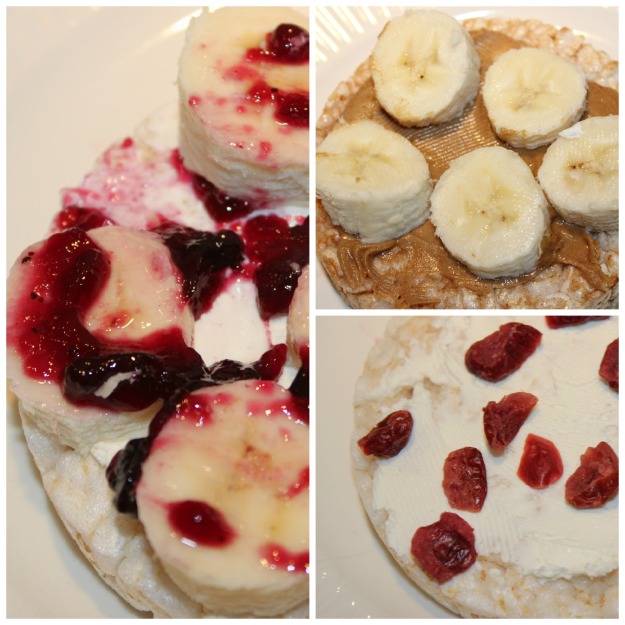 They are delicious. Before the half marathon, Kaela pulled this snack out and it was perfect before our run.

It doesn’t really photograph well, but the sharpness of the cranberries goes really well with the rice cake and the cream cheese.

I made this in my kitchen, and while I was placing the cranberries on it my sister, my mom and Brent all became curious. My sister loved it and Brent was pleasantly surprised. He’s the sceptic when I’m trying new things out and he actually liked it. 🙂

From there, bananas made it onto the cream cheese and it was topped off with a blueberry jam that is made with fresh wild blueberries from maine. It’s not a sweet jam at all. But the snack is extremely moist and filling. 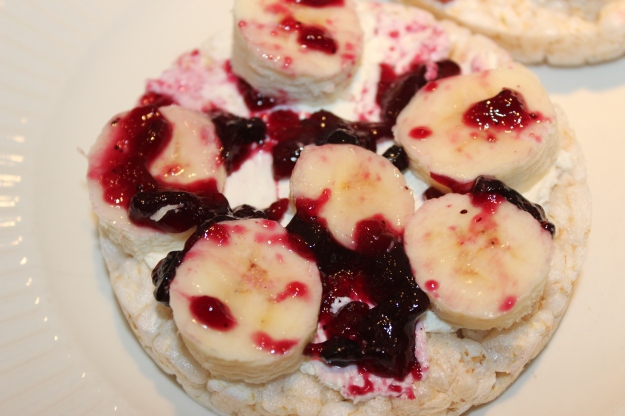 And for something a bit sweeter, try taking the Apple Rice Cakes and top it off with peanut butter and sliced bananas. Brent’s response to this one, “You did good things.”

With the fall upon us, I am looking forward to trying a PUMPKIN flavored rice cake! Apples might be something to try on it as well. Raisins??

Have you ever taken a boring, bland snack and made something amazing with it??