This week Mama C was cooking up some dinner for the family and she was working on this cauliflower dish. She called me and Maggie over to give it a try because she wasn’t sure about how it tasted. As soon as Maggie and dove a finger into, we were hooked. This dish is filled with a strong lemon and garlic flavor that really took the cauliflower to another level. We couldn’t get enough of it.

So, Mama C has allowed me to share this amazing recipe with all of you 🙂 I’m telling you, you won’t be disappointed. She has somehow found a way to take cauliflower and make us WANT to eat it. Crazy. 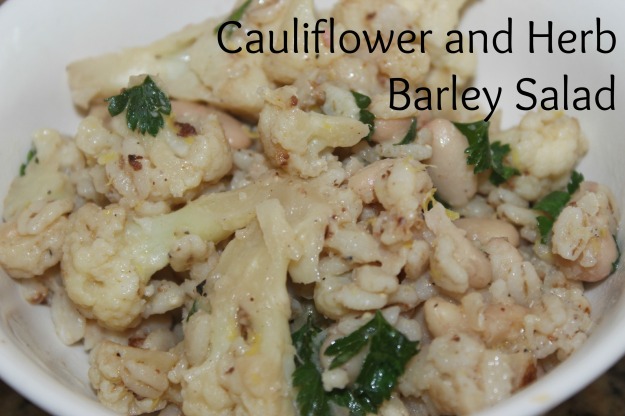 1. Start cooking the barley in a large saucepan, according to the directions on the package. Once it is cooked, drain it and set it aside.

2. Whisk the lemon juice, mayonnaise, mustard, 3 Tablespoons of Olive oil. Finely grate the garlic clove and whisk it into the dressing as well. Finally season it with salt and pepper to taste.

3. In a large skillet, heat up apprx. 1 Tablespoon of olive oil over medium high heat. Add in the cauliflower and occasionally stir it until it begins to brown in spots. It should take about 10 minutes.

4. Add in 2 tablespoons of water, then cover it and allow it to cook for 2 minutes longer, or until they are tender. Season them with salt and pepper to taste.

5. In a large bowl, add in the dressing, then add in the cauliflower, barley, beans (washed under cool water) and parsley. Toss it to coat everything and top it with the zest of lemon.

I can’t tell you how delicious this is. We had it as a side dish, but you could definitely have this as a main dish and even top it off with some sort of meat. You can also substitute the barley for quinoa or any other grains. The dressing is really simple and could compliment just about any grain.

This weekend we were hit with another storm, which was actually originally going to get up to 13 inches. But the temperature rose just enough last night to turn it into rain, and really reducing the amount of snow…and just making everything slushy.

However, that didn’t stop Bacon and Oreo from heading outside to get a spot of exercise. They have been kind of cooped up and Bacon has been staring at us begging to let him out. Colleen ended up taking the two of them out in the snow and throwing a ball around. You couldn’t have pictured any happier dogs.

If you couldn’t tell, Oreo is back to her old self. We are trying to keep her from jumping around too much, but she doesn’t really have any interest in doing so. I took her to the vet on Friday and they came to the conclusion that it wasn’t took bad of a herniated disk because she did recover so quickly.

Hopefully the snow isn’t took bad for my flight tomorrow 🙂