Exciting! Halloween! For some reason the day doesn’t bring about as much excitement as it used to. Being on the road all the time really makes me really miss that traditional office setting where people get all dressed up, decorate their cubicles and bake some treats for all their co-workers. My company even had trick or treating where they brought their kids to the office and they got to walk around in their costumes. So FUN!

When I was little, my dad used to take our little gaggle of a family out trick or treating and it eventually became a game to make sure we hit all the best houses. There was the house a few streets behind us that decorated the inside of theirs as a haunted house and they gave out small packages of candy. Then there was the cookie lady’s house, who gave out…who would have guessed, cookies. Not just a single wrapped cookie, but a BOX of cookies to each of us. Oh yea. I remember my mom rolling her eyes when we got back with 5 boxes of oatmeal cream pie cookies.

The one house that is seared into each one of our minds, my brother and mine especially, was the house down by our old soccer field. It was just a small house, with two stairs that led up onto a small porch, usually decorated with pumpkins and other typical Halloween themed things. The first Halloween that we went to this house, it was just my older brother, myself and my dad. I was about 4 or 5 and my brother just a year older. We had been walking house to house for a while when we came up to THE HOUSE. I didn’t feel like going up to it for some reason so my dad and I stood at the end up the walkway and sent my brother up to the front door.

I remember him being a bit nervous to go up there by himself but my dad urged him along. As he got to the steps leading to the porch, he glanced down at the pumpkins placed on the steps, got to the doorway and looked over at the scarecrow placed on the porch swing. He rang the doorbell and out of the corner of his eye he saw the scarecrow jump up and start to move towards him. My brother literally jumped sky high, flew down the porch stairs, screaming with tears streaming down his face towards my dad. Traumatized.

The scarecrow came off the porch and apologized to my dad for scaring my brother, but the damage was done. Every single Halloween afterwards, that was the house with the scarecrow and my brother was the one that stood on the side walk.

Anyways, for Halloween this year, two of my friends and I were super heroes and the boys were clowns. Terrifying clowns.

I was specifically the black widow 🙂 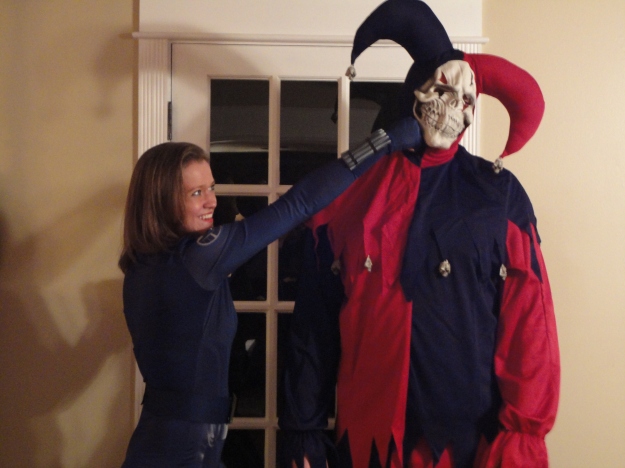 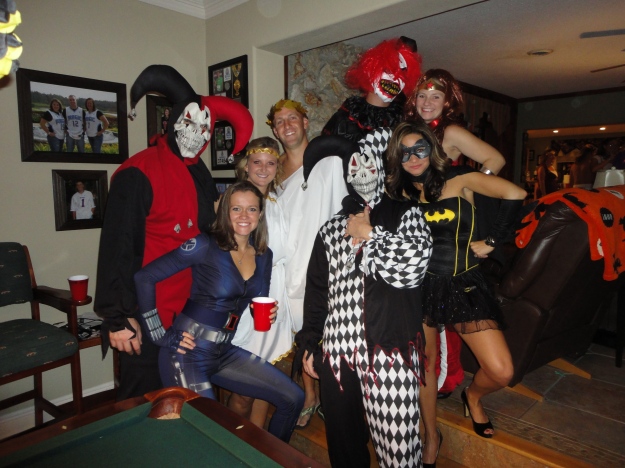 A group shot! We had so much fun hanging out with our friends and dressing up for Halloween. But I have to say, I do miss those days going house to house collecting candy and then sitting at home afterwards trading for the best kinds! There is definitely a hierarchy of candy! Reeses and Kit Kats were at the top and tootsie rolls were definitely a two to one trade.

My favorite costume was being a pirate. It was just so much fun running around acting like a pirate.